The 9th edition of Olhares do Mediterrâneo - Women's Film Festival (November 14-20) brings a lot of good news: more days of cinema; two venues, a 50-year journey in the cinema of Lebanon, guest country of this edition and a special INATEL prize for the best short film from a Portuguese school.

From November 14th to 16th, the Festival will be held at the Cinemateca Portuguesa with a program exclusively dedicated to films by Lebanese women directors. It will continue from November 17th to 20th at São Jorge Cinema, with, as is its tradition and mission, the film production of women coming from or working in all Mediterranean countries.

The vitality and talent of Mediterranean women filmmakers will be celebrated through the screening of 51 films (shorts, medium and feature length films) - most of them national premieres - produced in 26 countries, including Portugal.

Women's eyes that cross from one end of the Mediterranean to the other, providing a kaleidoscopic image of their condition, their desires, their struggles, their fears and their strength, through documentary, fiction and animation works. 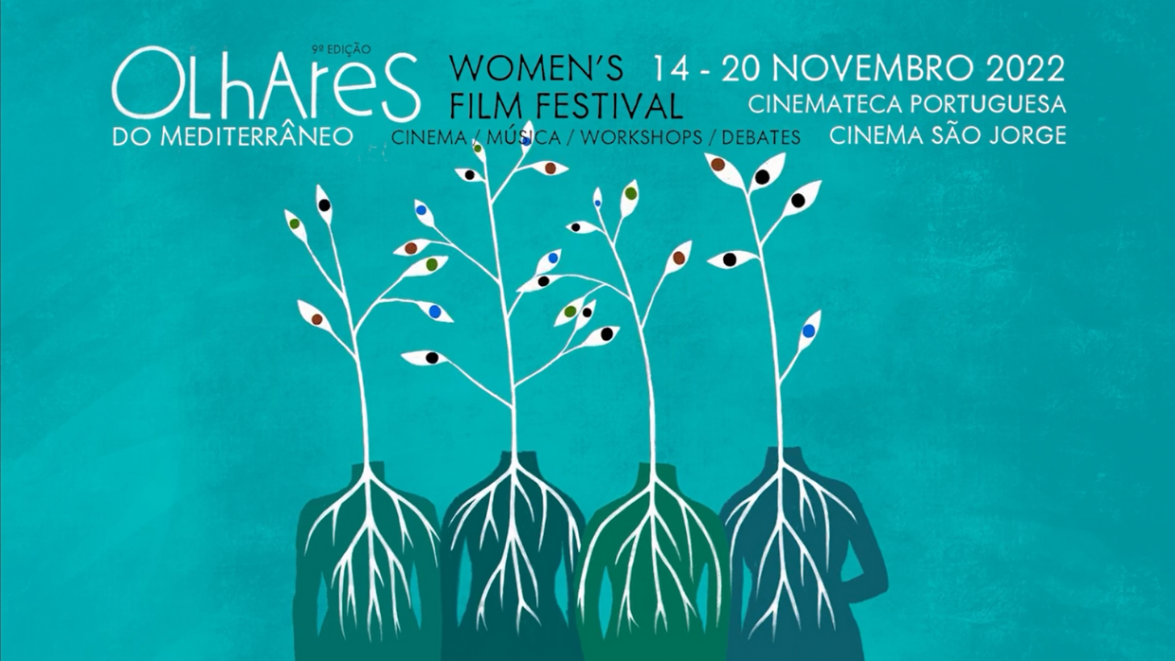 The official opening ceremony will take place on November 17 at Cinema São Jorge, with the film Murina (2021). This Croatian, Brazilian, North American and Slovenian co-production, with Martin Scorsese among the executive producers, is the first feature film by the Croatian director Antoneta Alamat Kusijanovic. Winner of the Golden Camera as best first work at the Cannes Film Festival 2021, the film is a tense work, where light and dark struggle to impose themselves on the screen, and violence is always about to explode. Julija is a restless teenager who lives with an oppressive father, Ante, and a submissive mother, Nela, on an island paradise off the Croatian coast. When they receive a visit from an old family friend with whom Ante hopes to close a deal, tension explodes and the machismo that defines the dynamics of the family and community is revealed. During a weekend haunted by desire and anger, Julija, as the director explains, "defies her father's power and, like a moray eel that is capable of biting itself to free itself from the fishermen, refuses to follow the path that others have set for her."

The closing film, on November 20, also at Cinema São Jorge, is a choral work that takes us to a completely different universe. Under the Fig Trees (2022), by the French-Tunisian director Erige Sehiri, is a Tunisian, French, Swiss, German, and Qatari co-production that premiered in the Directors' Fortnight in Cannes this year. Filmed over the course of a day, from dawn to sunset, it portrays a group of girls and boys working in the summer harvest. Each has their own stories, their own ambitions, their own sorrows. As they wander among the fig trees, they develop a continuous polyphonic dialogue, which is both personal - exploring their feelings and dating - and political, because they reflect and confront each other about the lack of opportunities and freedom of young women, who seek escape routes from the rural environment and the Tunisian social organization that oppresses them.

Among the feature films, another fiction film from Tunisia stands out, I'll Go to Hell (2021), by Ismahane Lahmar. Censored in Egypt, this film tells the story of a woman who wants to decide how to live the last days of her life, against the wishes of her family and religious impositions. Family and family ties, sometimes perverse, are also at the heart of the Italian film The Den (2021) by Beatrice Baldacci, which premiered at the Venice International Film Festival in 2021, and The Consequences (2021) by Claudia Pinto, a Spain, Netherlands and Belgium co-production. Both films will be screened with the presence of the directors.

The medium and feature length documentaries will give the motto for several debates. On November 17th, Erasmus in Gaza (2021), by Chiara Avesani and Matteo Delbò (Spain) will be followed by the debate Palestine: Everyday life and resistance; on the 19th, Room Without a View (2021), by Roser Corella (Austria, Germany, Lebanon) will precede the TRAVESSIAS Debate, on the topic of domestic work and human trafficking; and on the 20th, the Portuguese documentary Ary (2021), will serve to introduce a debate on transsexuality in which director Daniela Guerra and the film's protagonist, Ary Zara Pinto, will participate.

The Portuguese presence in this edition of the Olhares do Mediterrâneo - Women's Film Festival is composed by several short films, which include works by experienced directors such as Madrugada (2022), by Leonor Noivo, and by young women in the beginning of their careers who are competing in the section Beginning to Look - School Films: Hysteria (2021), by Luísa Campino; Mesa Posta (2022), by Beatriz de Sousa; Vergôntea (2022), by Sara Carregado. These films, along with O Maravilhoso Mundo de Miguel (2021), by Ghada Fikri, a Portugal, Hungary, Belgium co-production, are competing for the recently established INATEL Award for best Portuguese school film.

Particular attention deserves the special program Olhares do Líbano (Lebanon). Held in collaboration with the Beirut International Women Film Festival / Beirut Film Society, this retrospective aims to present a selection of films (documentaries, fiction, shorts) by Lebanese women directors produced between 1974 and 2021, in order to offer the Lisbon audience a glimpse of one of the richest cinematographies of the Middle East. The selection Looks from Lebanon starts at the Cinemateca Portuguesa between November 14th and 16th, with four feature films (fiction and documentary) and two shorts, and continues at São Jorge Cinema with another documentary and two shorts, for a total of nine works.

Programme for the Cinemateca Portuguesa (all sessions will be presented by Sam Lahoud, director of the Beirut International Women Film Festival):

The Hour of Liberation Has Arrived (1974) and Leila and the Wolves (1984), two extraordinary and strongly political works by director Heiny Srour. The Hour of Liberation Has Arrived, the first film by an Arab filmmaker to be screened at the Cannes Film Festival and distributed worldwide - made under extremely precarious conditions, transporting the camera on foot through the desert for hundreds of kilometers - is the only existing testimony to the "Liberated Zone" of Dhofar, in the Sultanate of Oman, which in the 1970s was the site of a radical, democratic, feminist social experiment aimed at liberating the people from the British colonizers and the local emir. The documentary portrays one of the brightest pages in recent Arab history and with its democratic and feminist message lies at the heart of contemporary issues. Leila and the Wolves (1984) combines reenactments, archival material, and philippic sequences to reveal the invisibilized role of Palestinian and Lebanese women in political struggles in the Middle East throughout the 20th century. Filmed over 7 years in often dangerous conditions, this documentary, besides affirming the role of women in the revolutions, is also a reflection on the work of the documentary maker and on representation. The film was shown in the Classici Fuori Mostra section of the Venice Biennale 2022 and was included by the UN in the list of essential films in the Women's Decade (both films are presented in restored digital copies with the support of CNC - Centre national du cinéma et de l'image animée. Leila and the Wolves was also supported by La Cinémathèque Française).

A Civilised People (1999), by Randa Chahal (1953-2008), is a corrosive black comedy about the madness of civil war. Violent and absurd, the film also points to the class struggle that accompanies the sectarian divisions that covered Lebanon in blood during the war and continue to haunt its present. The film was an Official Selection at the 1999 Venice Film Festival.

Zeina Daccache's Scheherazade's Diary (2013) is a multi-award winning documentary about a theater experiment with the inmates of Baabda prison (Lebanon). Many of these women were imprisoned for defending themselves against abuse, and in the theatrical laboratory developed with the director they denounce with a tragicomic vein the social and structural rais of their condition.

The short films in the program take us in a poetic but always engaged register to contemporary Lebanon, where the marks left by the civil war are superimposed on recent environmental disasters. Barakat (2020), by Manon Nammour, is a reflection on memory and place, a declaration of love for Beirut, and a denunciation of the transformation of the city center into an empty monument to luxury. Then Came Dark (2021) by Marie-Rose Osta is a dark tale in which a tree uprooted and dragged like a corpse through a forest in the mountains symbolizes the destruction of nature and its inevitable consequences.

Mai Masri's documentary feature Beirut: Eye of the Storm (2021) follows four young women artists as they experience and document a turbulent period in more recent Lebanese history, from the October 2019 uprisings against the ruling regime, to the confinement due to Covid-19. To arrive on August 4, 2020, when the huge explosions in the port disfigured the city's shape once again, killing hundreds of people and injuring thousands. The 2019 riots are also the starting point of Dahlia Nemlich's short film Roadblock (2020), in which Farah and her French-Lebanese boyfriend are pulled over by armed militiamen at a makeshift block station, as if the civil war had never ended. Finally Warsha (2021), by Dania Bdeir, offers a decidedly contemporary yet surreal perspective on Beirut as seen from atop a crane, in a Syrian refugee's dream of queer freedom.

Returning to the general program, in 2022 the Olhares do Mediterrâneo - Women Film Festival presents, as is already tradition, a special session for families, with films for children aged 6 to 12, on Sunday (at São Jorge Cinema), and the film workshop for parents and children (4-7 years old) Olhares em Pequenino, on Saturday morning.

For adults, the parallel activities will include, besides the debates, a masterclass by the director Heiny Srour (to be confirmed) on November 17th, the workshop Unraveling Freedom, organized by the Lebanese creative platform Efata - Ateliers Nomades, on the 19th, and the concert by the band Malotira, after the closing session on the 20th.